(An initiative to educate the children of migrant brick kiln workers in Chaksu / Renwal area of Jaipur District, Rajasthan)

According to 2001 census more than 12,62,570 children were working in the age group 5-14 years in Rajasthan. Brick industries are a hazardous industry because it produces lot of dust in the work place. The children who work in brick industries are the children of migrant laborers; they accompany their parents to the brick chambers and help their parents in their work. In the survival struggle parents do not bother about children’s education.

Background: A small initiative of educating the children of migrant laborers working at brick kilns in the Garudwasi area of Chaksu block (Jaipur district, Rajasthan) was initiated in the beginning of 2014. A humble beginning with one school serving 30 students at Mahadev Brick Kiln in 2013-2014 increased to 15 schools with 787 students covering 32 brick kilns in 2021-2022. All this was made possible by support from well wishers and friends.

Present Status: During the session 2021-2022 ten schools (informal learning centers) covering 13 brick kilns in Kotkhawda/Chaksu area and 5 schools covering 19 brick Kilns in Renwal area of Jaipur district (Rajasthan) were opened. The location of brick kilns where the schools were opened are as follows:

The parents and students have been happy with the school that it has been set up at their brick kiln. Parents report that if the classrooms had been located in other more distant areas they would not have sent their children to school. Some of the children who attended this year were those coming to school for the first time. Since all the students came from very poor financial background sweaters and shoes along with two pairs of socks were distributed to all students during winter. It was a necessary protection from the cold for the kids.

Sukhdev belongs to Rampur village, Tehsil Milak, district Rampur Uttar Pradesh. He came to Rama Brick Kiln with his father, brother and sister. His mother died 6 years ago. They don’t have much land at their native place so his father used to work in the rice fields. This was not sufficient to run the family. As a result they had to migrate to the brick kiln in search of livelihood. They had a school in their village but teacher there “beat more and taught less”. He is very satisfied with the teaching at brick kiln. During the baseline survey he was not able to read books but by the end of the year he was able to read books.

In Math’s he could recognize numbers from 1-10 but after 3 months of practice he could recognize numbers from 100-999. He is also able to do simple calculations using addition and subtraction. At home his father helps him in studying and also doing homework. In his initial days in school he was a shy boy who did not talk much but now he has overcome his shyness and participates in all the activities of the class. During free time he also helps his father and brother in making bricks.

Kishan lives at Mahadev Brick Kiln with his 2 brothers and 3 sisters. His father Jagdish Mallah used to row boats in his village Sanowari in Kasganj tehsil of Etta district in Uttar Pradesh. When lots of people started playing boats in the river his income decreased. They have only one bigha of ancestral land which is too small to take care of the big extended family.

Kishan’s father says that the day he had left boat rowing he and his wife along with 6 children left the village and began doing labour jobs. Kishan had never been to school because his family did not permanently live in the village. When they came to Mahadev Brick Kiln he was very happy to see the school on the premises. He was delighted to see that along with labour his children would also get an opportunity to learn something. 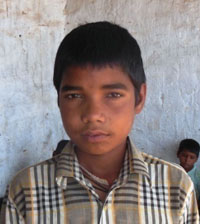